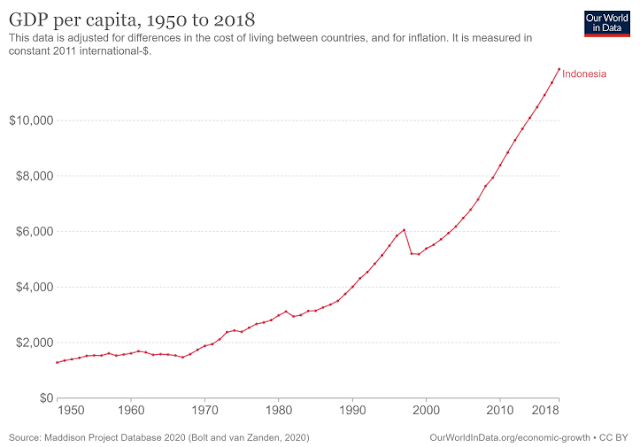 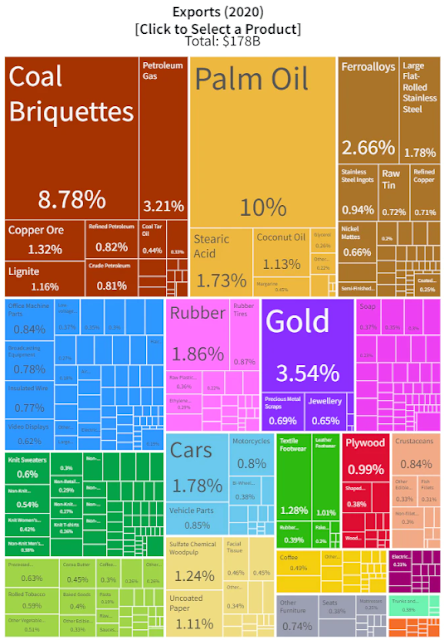 ...But starting in the early 2000s, there was another factor (yếu tố khác), which Aswicahyono et al. mention only briefly (đề cập thoáng qua) — the rise of China. If you were a multinational company (tập đoàn đa quốc gia) who wanted to make shoes cheaply in 1991, you went to Indonesia; in 2003, you went to China. FDI (đầu tư trực tiếp nước ngoài) into Indonesia recovered (hồi phục) and even accelerated (tăng tốc) in the mid and late 2000s, but much was now flowing (chảy vào) into resource-extractive industries (ngành khai thác tài nguyên). A third factor might have been what economists call Dutch Disease — rising commodity prices (giá thương phẩm tăng) in the 2000s made it more lucrative (có lợi, có lời) for Indonesian entrepreneurs (chủ doanh nghiệp) to sell commodities instead of manufactured products.
In other words, Indonesia went from making shoes and computers to chopping down trees and digging up rocks.
...Indonesia switched its whole development model while barely missing a beat. And it did this even though global commodity prices experienced wild ups and downs over that period.
This kind of smooth, even growth is not typical for a commodity exporter. Economic models would struggle to explain how huge shocks to the terms of trade would leave GDP effectively untouched. How can we explain it?
Well, one potential answer is urbanization (đô thị hóa). While Indonesians’ movement into cities did slow a little bit after the turn of the century, it kept going at a decent (kha khá, tươm tất) rate. Another possible answer is regional agglomeration (sự kết tụ trong khu vực) — essentially (về cơ bản) every country in the region has experienced smooth growth over the last two decades, despite big differences in industries and development models:
Indonesia’s return to growth in the 2000s and 2010s might thus be a story of neoliberal success. Trade liberalization (tự do hóa thương mại) — which continued after Suharto’s fall (sụp đổ), with prodding (thúc đẩy, kích động) from the IMF — meant that Indonesia could always find something to sell to the countries around it, even if its comparative advantage (lợi thế so sánh) shifted from manufacturing to logging and mining.
But in the long term, it’s still no good to have an economy based mainly on logging (chặt thành từng khúc, đốn gỗ) and mining, for several reasons. First, no country has ever reached the ranks of the developed nations that way, except for a few small petrostates. Second, eventually you start running out of easily accessible trees and rocks. And third, chopping down trees and digging up rocks is very hard on the environment, which tends to stoke popular anger.
So Indonesia needs to shift back toward manufacturing, and resume the industrialization that paused after 1997. And incredibly, it does seem to be moving in this direction!
...Indonesia’s post-colonial history is violent (bạo lực) and turbulent (hỗn loạn, náo loạn, không yên ổn). In the 1960s the army, with support from the U.S. CIA, committed a mass slaughter (tàn sát) of half a million (nửa triệu) suspected (bị tình nghi) communists. In 1998 there was a huge series of riots against ethnic Chinese people, which ended up toppling (lật đổ) the country’s dictator (nhà độc tài) at the time.
Bài trước: Sri Lanka: nhà nước thất bại?
Tags: economics