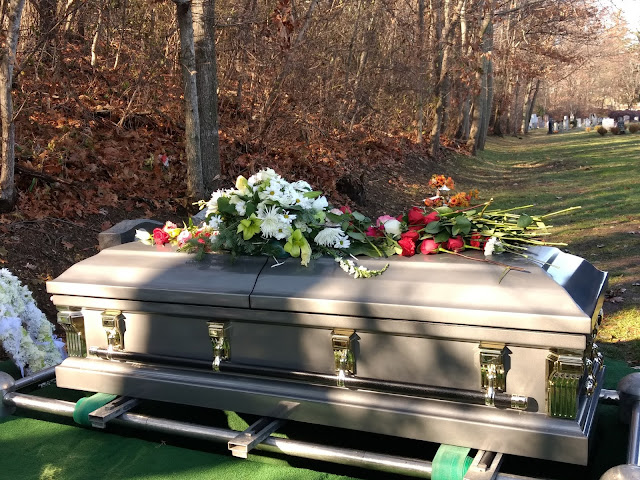 Photo by Rhodi Lopez on Unsplash
"Closed-casket funeral" có casket là quan tài -> cụm từ này nghĩa là đám ma nhưng quan tài được đóng kín, người ngoài không thể nhìn được vào trong.
Ví dụ
Events surrounding Reed's death were broadcast (phát sóng) in real time on Facebook, including comments by a responding detective who is heard saying: 'I think it's going to be a closed casket, homie,' an apparent reference to a closed-casket funeral.
Our Covid funeral at Jiji Ndogo brings more drama than anyone would have anticipated (thấy trước). First, the entire village wants to attend the funeral. News that only immediate family members are allowed has them incensed (thắp hương). “We want to see how a person looks when he dies of corona,” one man says. “Due to all the precautions in place, it will be a closed casket funeral,” I say.
“We can still have private family viewings and still have a closed-casket funeral with 50 or less people,” Marshall said. “There are going to be people who are disappointed when the times will not be announced in the paper, but what are you going to do? It is private.” Marshall said it is natural to want to extend a hand for a handshake, but during this time of social distancing he reminds people that for now, that needs to go by the wayside (lề đường) and they should place their hands in their pockets.
Earlier, her closed-casket funeral was held at Christ the King Church in Khudadad Colony. The prayers were led by Archbishop Joseph Cardinal Coutts. It was a very brief (ngắn gọn) ceremony with limited attendance due to the church’s standard operating procedures, which also needed to be followed strictly. But it was all streamed live on the Dar ul Sukun page on Facebook.
Ngọc Lân
Bài trước: "Burst on the scene" nghĩa là gì?
Tags: phrase