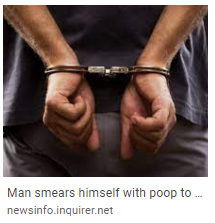 the foul tactic, police still managed to nab (tóm cổ, bắt được quả tang) him.
The suspect (kẻ tình nghi), 23, identified only as Arjun, was arrested in New Delhi and was found to have been involved in four criminal (hình sự) cases, Press Trust of India via Indian magazine Outlook reported on Saturday, Oct. 23.
Police spotted Arjun and another suspect behaving suspiciously while on a bike last Thursday. When they signaled to stop, the two men reacted aggressively, as per a senior police officer.
Both made an attempt to escape after their bike slipped. Arjun’s companion ran opposite to oncoming traffic while Arjun was caught after fleeing for 1 kilometer.
Arjun tried to ward off police with pepper (hạt tiêu) spray (xịt), and when that failed, he grabbed poop from his pants and smeared it on his body and on the uniform of one police officer. The officer was unfazed and apprehended (bắt giữ) him.
Bài trước: Cũng đáng thử một lần
Tags: india