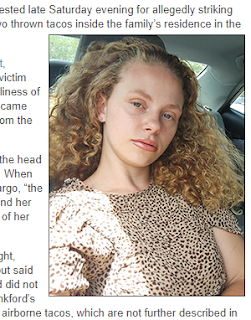 (sạch sẽ) of the house (nhà)” when Lankford “became upset” and “threw (ném) two tacos from the dining room (phòng ăn).”
The tacos struck the victim in the head as she was sitting on a couch (ngồi trên ghế sofa). When cops arrived at the home in Largo, “the victim had food debris all around her on the couch and on the back of her shirt,” a police officer noted.
Cops say Lankford, admitted to the taco tossing, but said she did it out of frustration (tâm trạng thất vọng/vỡ mộng) and did not mean to strike her mother. Lankford’s mother was not injured by the airborne tacos, which are not further described in the affidavit (bản khai có tuyên thệ).
Lankford was charged with domestic battery, a misdemeanor (tội nhẹ, khinh tội), and booked into the county jail. She was released from custody yesterday morning on $100 bond. A judge has ordered her to have no contact with her mother.
Bài trước: Thầy Khoa vẫn còn may
Tags: kid