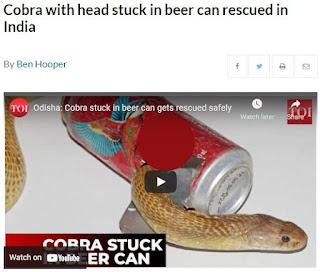 Rescuers with the Snake Helpline said they were summoned to a village in Odisha's Puri district after local residents found the 4-foot spectacled (có vòng quanh mắt như đeo kính) cobra with its head stuck inside the opening at the top of an empty beer can.
A video from the scene shows a rescuer using a pair of scissors to carefully cut through the can and free the snake.
The rescuer said the cobra suffered only minor injuries and was treated with an antibiotic spray before being released back into the wild.
Bài trước: Cần vũ khí hạt nhân là đúng rồi
Tags: beer
Tags: india