Đăng bởi lovebird21c - 17 Jan, 2022
nghiên cứu mới cho thấy chó có khả năng 2 ngoại ngữ...
-----
Researchers suspect (nghĩ rằng) dogs can learn up to 165 words. While it's clear our canine (có răng nanh) friends can understand some of the native language their human parents speak, can their brains distinguish between different languages? For example, if they lived in a bilingual household? 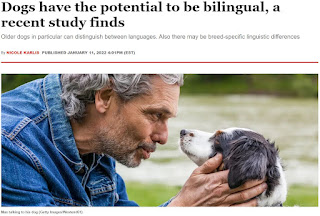 ...Cuaya's personal experience was the impetus (động lực) for a study titled "Speech naturalness detection and language representation in the dog brain," which was recently published in the peer-reviewed journal NeuroImage. Together, the researchers scanned the brains of 18 dogs, including Kun-kun, using functional magnetic resonance imaging (chụp ảnh cộng hưởng từ) to study which regions of the brain lit up when they heard words either from a language they were familiar with, or one they didn't know so well.
The researchers found that the canines' brains could understand speech from non-speech vocalizations (such as gibberish) by observing the activity in the primary auditory cortex after having the dogs listen to "natural speech" and "scrambled speech."
Bài trước: Có lẽ ư?
Tags: science