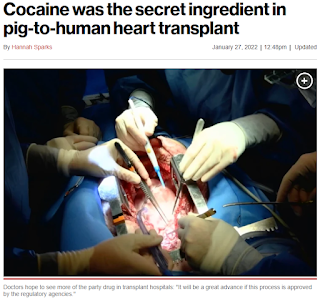 Now, doctors hope to see more of the party drug in transplant hospitals.
Dr. Muhammad Mohiuddin, director of xenotransplantation — which refers to the process of transferring an animal organ into a human — at the University of Maryland Medical Center, spoke to Vice News about his historic work on a 57-year-old patient who became the host of a genetically modified (biến đổi gien) pig heart.
The heart was developed by lab company Revivicor, tweaked so that its DNA would be more amenable (dễ bảo, biết nghe theo, phục tùng) to a human host, then fortified (củng cố, làm cho vững chắc, làm cho mạnh thêm) with the party drug by Swedish medical tech company XVIVO, before traveling to the US.
Usually, transplant organs originate from much shorter distances as they deteriorate (làm hư hỏng, làm giảm giá trị) within a few hours outside of the body.
Mohiuddin explained how cocaine was used in a mixture among hormones, including cortisol and adrenaline, that keep the live tissue from spoiling during its long journey overseas to Maryland, but the proprietary (giữ độc quyền) solution raised flags with drug enforcement officials in the US, where cocaine has never before been used in this setting.
Bài trước: Chán rồi phải không
Tags: health