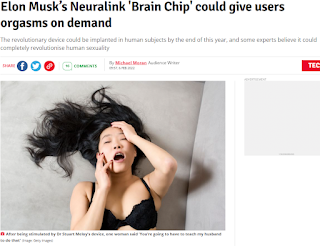 Of Musk’s two futuristic dreams, it’s the second one that has the most potential to change humanity.
While most of the early publicity about Neuralink, the SpaceX entrepreneur's brain-to-computer interface, has focused on its potential to unlock the lives of people living with severe (nghiêm trọng) paralysis (chứng liệt) by allowing to control robotic arms and even one day entire exoskeletons (bộ xương ngoài), the technology would change the way that the rest of us communicate, learn, and have sex.
Neurobiologist Professor Andrew Hires said: ”The first application you can imagine is better mental control for a robotic arm for someone who's paralysed."
But more than one researcher has explored the idea of stimulating the brain’s pleasure centres directly, allowing people to do without drugs or alcohol to achieve pleasurable sensations.
Dr Stuart Meloy developed a device in 2001 that was playfully dubbed “The Orgasmatron”.
It was designed as a pain management system but, as he told New Scientist: “I was placing the electrodes and suddenly the woman started exclaiming (kêu) emphatically (mạnh mẽ, dứt khoát).
“I asked her what was up and she said, 'You’re going to have to teach my husband to do that'."
Meloy had accidentally given the woman an orgasm (cực khoái) by connecting the electrodes of his pain management system to the right spot on her spine (xương sống).
Bài trước: Sẽ không thế nữa
Tags: sex