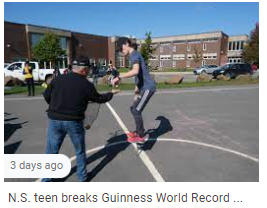 Guinness World Records (kỷ lục thế giới) confirmed (xác nhận) this week that Hafting's feat (kỳ tích, chiến công) was a new world record.
Hafting said he trained for about three months before attempting the record.
"I would bounce on a pogo stick as long as I could, as many days of the week I could," he told Global News. "So I would bounce on it for 10 minutes, and that's all I could do, and then I bounce on it the next day for a little longer."
Hafting said that once he reached the 45-minute mark on the pogo stick, he learned to wear knee pads under his pants to keep from getting blisters (giộp da, phồng da).
The teenager said he started solving Rubik's cubes about six years ago, after a friend showed him a technique.
Bài trước: Con ơi là con
Tags: kid