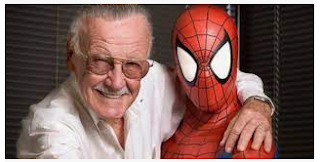 Around that time they hired an ambitious (tham vọng) young kid called Stan Lee.
Stan Lee loved Jack Kirby’s style and began to write the words for his pictures.
It worked well, Lee had a conversational style, more natural and more fun than the rigid format of language employed over at DC Comics.
DC owned the whole comic book sector at that time, with characters like Superman and Batman.
Stan Lee thought these were written for children, which is why the language was so stiff and unnatural, he thought the audience should be teenagers rather than children.
But, as any copywriter knows, the real hard, manual labour is the drawing and art direction not the writing.
While Lee could finish the writing quickly, it took Jack Kirby ages to complete the drawings.
Which is what made the comics so great, they were dynamic, powerful, and exciting, teenagers loved both the drawing and the writing.
With all the spare time left over, while Kirby did the drawing, Lee began to write a page in each issue where he’d talk to the readers in a loose, contemporary style.
He’d talk about his plans for the comics, he’d sign it ‘editor-in-chief’, he even changed the name to Marvel Comics.
Meanwhile, Kirby had no time to write anything for the editorial pages, he was drawing night and day.
Pretty soon everyone got the impression Stan Lee was the boss and Kirby was just one of his assistants, particularly as Lee began every comic with the title: A STAN LEE PRODUCTION.
Despite the fact that Kirby had created: Captain America, Hulk, the Fantastic Four, Iron Man, Doctor Doom, the Avengers, Galacticus, Thor, Black Panther, and M.O.D.O.K., among others.
For all his work, Jack Kirby had no shares in the company, in 1970 he was sick of being treated as just one of Stan Lee’s employees and he left Marvel Comics.
Stan Lee simply used other artists to continue Kirby’s work, so hardly anyone even noticed he’d gone, which perpetuated the image that Marvel Comics was all Stan Lee.
So much so, that when Marvel was eventually sold to Disney, Stan Lee made millions and was put on a lifetime salary of $1 million per year.
Disney began turning the Marvel creations into cinema franchises, by 2019 these films had made $22 billion.
The Marvel characters also became video-games, theme-park attractions, a Broadway musical, TV series, arena shows, role-playing-games, etc, etc.
None of which Jack Kirby saw a penny from.
So now we have to look at the situation: did Jack Kirby get screwed?
Well on the one hand, lots of his characters were sold and made millions for other people.
Looked at that way, you could say he got screwed.
But look at it another way, when he was young he was making next to no money.
No one wanted his ideas, he had a family to support and no way to use his talent.
Stan Lee helped build the company they worked for, they both made a lot of money, Jack Kirby became famous inside the comic-book world, he immediately got a job elsewhere, and his ideas were published instead of being ignored.
So on the other hand: no, Jack Kirby didn’t get screwed.
That’s always the creative person’s dilemma (thế lưỡng nan): we’re not good at business so we can’t build a company on our own.
We need someone to help build it, but then that person often gets more money and/or credit than we do.
The best summation I heard of this was from Carl Ally.
At the end of his life he and his partner, Amil Gargano, were looking back over the agency they’d built and what they’d accomplished.
Carl Ally summed it up, “Well, we didn’t get as much as we deserved, but we got more than we ever dreamed of.”
Tags: work