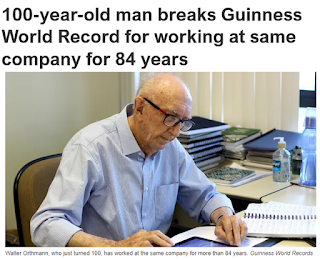 Born in the small Brazilian town of Brusque on April 19, 1922, Orthmann wanted to get a job when he was 15 to help with family with financial problems (vấn đề tài chính), according to Guinness World Records.
Because of his proficiency (thông thạo) in German, he was hired as a shipping assistant (trợ lý) for the textile (dệt may) company Industrias Renaux S.A., now known as ReneauxView, on Jan. 17, 1938. Soon after, he was promoted to a position in sales and then became a sales manager, a position he has held ever since.
Bài trước: Chỉ được cái mồm
Tags: work