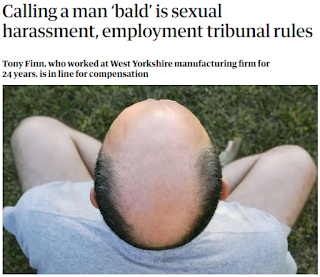 Hair loss (rụng tóc) is much more prevalent among men than women so using it to describe someone is a form of discrimination (phân biệt đối xử), a judge (thẩm phán) has concluded. Commenting on a man’s baldness in the workplace is equivalent to remarking on the size of a woman’s breasts, the finding suggests.
The ruling – made by a panel of three men who in making their judgment bemoaned (than khóc, nhớ tiếc) their own lack of hair – comes in a case between a veteran electrician (thợ điện) and the manufacturing firm where he was employed.
Tony Finn – who is in line for compensation (sắp nghỉ hưu) – had worked for the West Yorkshire-based British Bung Company for almost 24 years when he was fired in May last year. He took the company to the tribunal claiming, among other things, he had been the victim of sexual harassment after an incident with the factory supervisor, Jamie King.
Finn alleged that during a shopfloor row in July 2019, King had referred to him as a “bald cunt (cái lồn nhẵn thín)”. The tribunal heard Finn was less upset by the “Anglo-Saxon” language than the comment on his appearance.
Bài trước: Khởi đầu ngày mới cùng NESCAFÉ
Tags: funny
Comments