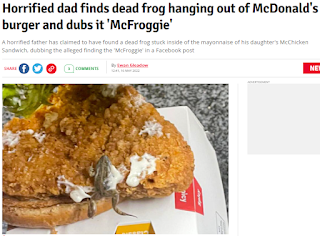 The father had been to a McDonald's stationed in the town of Secunda in the South African province of Mpumalanga when the slimy surprise found its way into the food.
McDonald's has been notified of the allegedly contaminated (nhiễm bẩn) burger, with the store told of Willem Bezuidenhout's claims of finding the dead frog inside of his daughter's burger.
The dad says he bought the McChicken meal for his daughter and that she came across the dead frog after already taking a few bites of the burger.
He said the incident was like something from a movie and referred to the burger as a "McFroggie".
Bài trước: Bữa tối đã sẵn sàng
Tags: funny
Comments