Đăng bởi lovebird21c - 06 May, 2022
cảnh sát ở Polk County Sheriff bán ma túy...
-----
Polk County Sheriff Grady Judd says he is "hotter than a bare butt on a tin roof in August" after learning a sheriff’s volunteer officer was caught selling prescription pills out of a patrol car while in uniform. 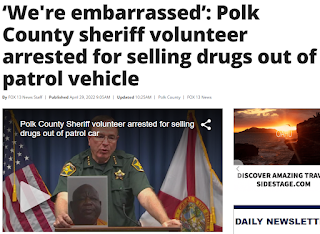 Deputies arrested David Roberts, 69, on Thursday on weapons (vũ khí) and drug (ma túy) trafficking charges (tội buôn lậu).
An investigation (điều tra) into Roberts' activities began after detectives (thám tử) learned that a volunteer was selling Oxycodone and that the prescription pills had been found inside a patrol car.
After investigators learned Roberts was getting 90 Oxydone pills a month for the past two years and selling them for $10 apiece, an undercover deputy offered him $12 a pill.
Roberts agreed to meet the undercover (tay trong, mật thám, chỉ điểm) deputy at a Lake Wales gas station and directed them to his patrol car for the transaction. Sheriff Judd says Roberts sat in the car, in uniform, as he counted the undercover deputy’s money and then handed over a baggie with the pills.
"That makes me so crazy I want to pluck my eyeballs out one at a time," Judd stated.
Bài trước: Nói dối như Cuội thì sao?
Tags: funny
Comments