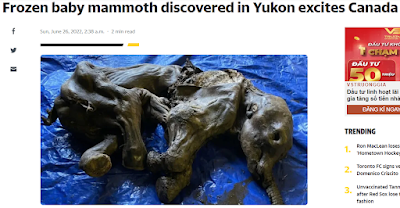 The mummified (ướp xác) ice age (kỷ băng hà) mammoth is thought to be more than 30,000 years old. It was found by gold miners in Yukon's Klondike region on Tuesday.
The area of the find belongs to the Tr'ondek Hwech'in First Nation.
The Yukon government compared it to Russia's discovery of a baby mammoth in the permafrost of Siberia in 2007.
It said it was "the most complete mummified mammoth found in North America", and only the second such find in the world.
The baby, thought to be female, has been named Nun cho ga, meaning "big baby animal" in the Han language spoken by Native Americans in the area.
Bài trước: THE BACKSTROKE BOYS
Tags: science