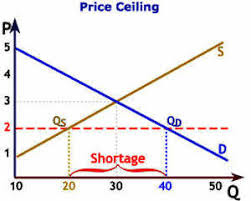 Ferrer saw, as anyone could see, that it is highly desirable that there should be a fair price for bread. He also thought – and this was where he went wrong – that an order from him could do the trick. He fixed the price of bread at the level that would have been right with corn at thirty-three lire per measure. But it was really being sold at up to eighty. Ferrer was behaving like a lady of a certain age, who thinks she can regain her youth by altering the date on her birth certificate.
DBx: Monetary prices and wages set on markets are not arbitrary (chuyên quyền, độc đoán, tùy hứng).
A government can indeed prevent people from transacting at nominal prices and wages above those stipulated by the government. A government can indeed prevent people from transacting at nominal prices and wages below those stipulated by government. But no government, in doing so, thereby transforms the market values of goods and services into those that correspond to the government-enforced maximum or minimum prices and wages. (Actually, quite the opposite occurs.)
People who believe that anti-price-gouging legislation helps low-income buyers, and that minimum-wage legislation helps low-income workers, do indeed express a belief that is the intellectual equivalent of the belief that a person can become younger merely (chỉ đơn thuần là) by scratching (cạo) out from his or her birth certificate the true date of birth and scribbling  (nguệch ngoạc) in an arbitrarily chosen later “date of birth.”
This belief becomes not a smidge more reasonable if it is held or expressed by people who call themselves “Progressive” and who boast about “following the science.”
Bài trước: Thế nào là lương công bằng?
Tags: economics