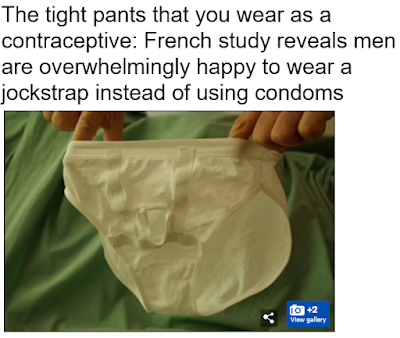 The tight underwear (quần lót chật), traditionally worn by sportsmen, heat the wearer up, which can work as a form of contraception (tránh thai).
A French study has shown men are overwhelmingly happy to wear a jockstrap instead of using condoms (bao cao su).
The underwear, which lifts testicles (tinh hoàn) close to the body, raising their temperature (nhiệt độ) by 2C and lowering sperm count (giảm lượng tinh trùng), is – apparently – worn for 15 hours a day to be most effective.
As an essential part of their kit, male cricketers have long sworn by jockstraps as a means of holding a box in place to prevent a different kind of eye-watering accident.
Bài trước: Đêm lãng mạn
Tags: sex