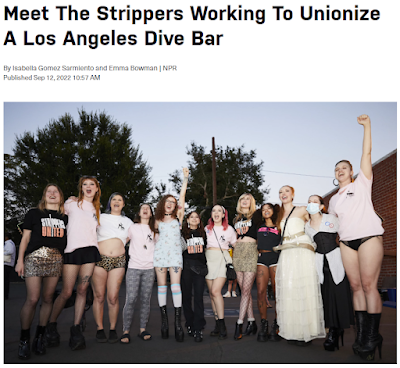 Before a car full of patrons can enter the parking lot of Star Garden, she cozies up to the driver's side window. She tells the group of four men why the bar — her former workplace — doesn't deserve their business.
"We do want to dance. We love it in there," Reagan tells the friends. But, turning on the flirt, she encourages them to instead dance with her co-workers on the sidewalk. "We're fighting for safer working conditions."
Reagan is among a group of former Star Garden employees who began striking (biểu tình) outside the club six months ago. Since then, the dancers have taken their performances outside — picketing, putting on costumed runway shows and deterring customers from entering a space that they say failed to protect them.
They allege that security fails to intervene when belligerent (tham chiến) customers threaten and physically assault dancers, that dancers are filmed without consent and that arbitrary (tùy tiện, tùy hứng) rules and quotas govern their job security. After two dancers asked management to take basic measures to address their safety concerns, the dancers say, they were fired in retaliation. Those firings were the final push that drove the group of Star Garden dancers to take the first leap in an effort to unionize.
Bài trước: Vợ bắt hay sao mà quyết tâm thế?
Tags: sex