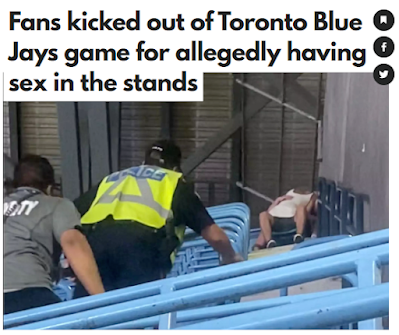 Dimitri Karakostas was one of several game attendees who can, not by choice, confirm that Chicago wasn't alone in getting f*cked at the stadium (sân vận động) last night.
"Uh, I filmed a couple having sex at the Blue Jays game today in the 500s," he told blogTO when sending over some shocking (and frankly hilarious) exclusive video footage on Tuesday.
In the clips, we see what looks like a woman in a white dress straddling (ngồi dạng háng) a man at the very back of the stadium, right where the dome splits apart and spreads wide open on sunny days.
While it's hard to know for certain, witnesses seem pretty confident that the couple got past third base.
Bài trước: Cứ để máy hút bụi cho anh
Tags: sex