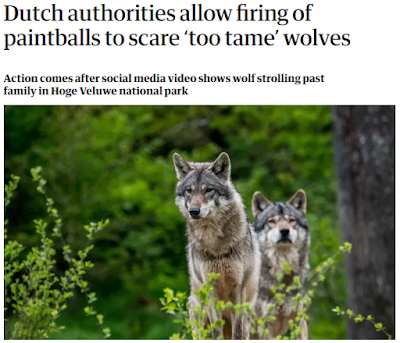 “We’re dealing with wolves that have become too tame (thuần hóa),” a spokesperson (người phát ngôn) for Gelderland province in the eastern Netherlands told the broadcaster Omroep Gelderland. “We have to make them frightened of people again.”
The provincial government in Arnhem took the decision last week after a video circulating on social media showed a wolf strolling (đi dạo, rảo bước) confidently (tự tin) past a visibly anxious young family in the 5,400-hectare (15,800-acre) Hoge Veluwe national park.
The provincial government spokesperson said paintballs had been chosen to allow park wardens to see which animals had been targeted. The objective was solely to frighten them and make sure they stayed at least 30 metres (100ft) from people, he said.
According to a report in June, the Netherlands is believed to be home to at least 20 adult wolves: a pack and two pairs in the Veluwe, a pair on the border between Drenthe and Friesland provinces, and 11 lone animals roaming the country.
Bài trước: Rõ hài
Tags: funny