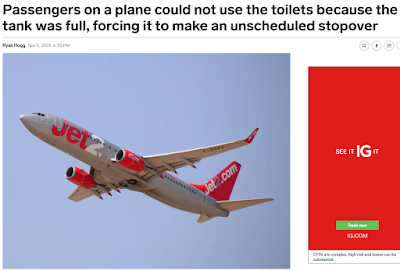 the Jet2 flight from the Spanish island of Gran Canaria to Manchester, England was forced to stop over in Bilbao, northern Spain, due to the tank trouble.
The diversion (trệch đi) resulted in a two-hour delay as well as thousands of dollars in fuel costs and landing fees (phí đỗ).
The emergency tracking platform Flight Emergency tweeted on Thursday: "Jet2 flight LS782 en route to Manchester from Gran Canaria has just diverted to Bilbao due to the toilets being broken on board."
..."Customers remained onboard, before the flight took off again to Manchester. As an award-winning airline, the comfort and well-being of our customers is of paramount importance (tối quan trọng) to us, however we apologise if this caused any inconvenience (bất tiện)."
Bài trước: Thế mới công bằng
Tags: funny