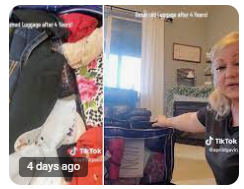 April Gavin posted a series of videos to TikTok explaining (giải thích) how her luggage (hành lý) was lost by the airline when she flew home from a business trip (chuyến bay công tác) to Chicago in August 2018.
Gavin said after several months of searching, the airline informed her that the bag's disappearance (biến mất) was a mystery (điều kỳ lạ). She was compensated (bồi thường, đền bù) for some of her lost items, but not all of them, Gavin said.
Gavin said she was shocked to receive a phone call this week informing (thông báo) her that her suitcase had turned up (xuất hiện) at an airport (sân bay) in Houston. She said she was further surprised to be told it had arrived on a flight from Honduras.
...Gavin said the bag was slightly damaged (hư hại) and worn, but its contents were intact (không suy chuyển). She said United Airlines told her part of the difficulty in tracking the bag was that it hadn't been properly (thích đáng, đúng đắn) scanned when she checked it before flying to Chicago.
Bài trước: Phải chăng bố mẹ nhớ con quá?
Tags: funny