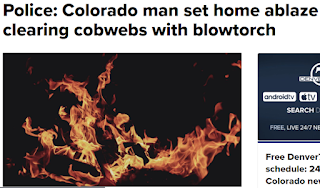 The Boulder Daily Camera reports the 39-year-old man was taken into custody (tạm giam) after Monday’s fire near Longmont.
He faces several charges, including first-degree arson (hỏa hoạn, đốt phá).
No one was injured in the fire.
Investigators say the man acknowledged using a blowtorch to clear cobwebs in the crawlspace under the home, and he tried to put out the fire for an hour by himself before calling emergency crews.
The blaze (ngọn lửa) caused about $100,000 in damages.
Bài trước: Thế ai trả tiền nhỉ?
Tags: kid