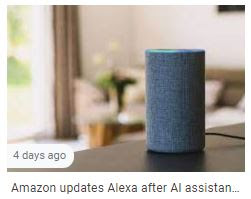 Amazon said it had updated (cập nhật) its Alexa software (phần mềm) after an Echo smart speaker told a 10-year-old to touch a coin to the partially exposed prongs (răng, ngạnh) of an electrical plug.
“OMFG My 10-year-old just asked Alexa on our Echo for a challenge and this is what she said,” Kristin Livdahl wrote on Twitter along with a screenshot of the “challenge” her AI voice assistant had suggested to her daughter.
“Plug in a phone charger about halfway into a wall outlet, then touch a penny to the exposed prongs,” Alexa suggested.
“The Penny Challenge” or “Outlet Challenge” is a common one on social media sites like TikTok even though performing it can lead to shocks, damage, fire and worse. Posts that show the challenge’s outcome can be seen under a number of hashtags.
Bài trước: Hăng hái quá
Tags: kid