Đăng bởi lovebird21c - 24 Jan, 2022
bé trai 2 tuổi nghịch điện thoại của mẹ, mua đồ ở walmart gần 2.000 usd...
-----
A New Jersey woman was browsing furniture on Walmart's website and adding items to her cart, but she hadn't yet purchased any of them. So when package after package started arriving at her door, she was so confused. 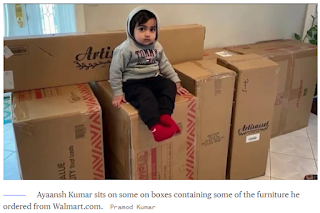 The woman, Madhu Kumar, said she asked her husband and two older children whether they had bought the items, but they said it wasn't them. That left Kumar's almost 2-year-old son, Ayaansh, as the lone culprit (thủ phạm), NBC New York reported.
Ayaansh, who is most likely still learning how to count (học đếm), was playing on his mother's phone when he ordered the items, totaling almost $2,000.
"It is really hard to believe that he has done this, but that’s what happened," his father, Pramod Kumar, told the station.
Bài trước: Xui dại
Tags: kid