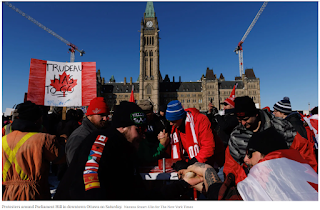 A loosely organized “Freedom Convoy” of trucks set out last weekend from the western province of British Columbia. The convoy ebbed and flowed in size on the way to Ottawa, the capital, where the police were bracing for what they said would be an unpredictable weekend of protests.
The convoy was organized in response to a regulation, implemented this month, that requires truckers returning from the United States to show proof of vaccination. But it recent days, it has broadened to include Canadians critical of pandemic (đại dịch) restrictions in general, and of Prime Minister Justin Trudeau.
Some people, who may not have been involved with the convoy itself, called for an attack on Parliament similar to the Jan. 6, 2021, storming of the U.S. Capitol. Such calls for violence have been denounced (lên án, phản đối kịch liệt, lăng mạ) by the convoy’s organizers, as well as by many of the protesters on the streets.
Bài trước: Bác sĩ vừa phê và nảy ra sáng kiến
Tags: health