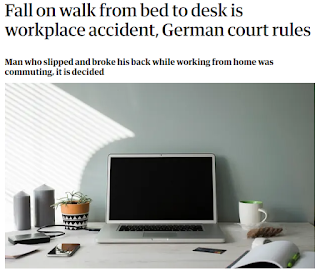 The man was working from home and on his way to his desk one floor below his bedroom, the federal social court, which oversees social security issues, said in its decision.
While walking on the spiral staircase connecting the rooms, the unnamed man slipped and broke his back.
The court noted that the employee usually started working in his home office “immediately without having breakfast beforehand”, but did not explain why that was relevant to the case. However, later it said that statutory accident insurance was only afforded to the “first” journey to work, suggesting that a trip on the way to get breakfast after already being in the home office could be rejected.
The employer’s insurance refused to cover the claim.
Bài trước: Quyền của em, thưa sếp
Tags: work