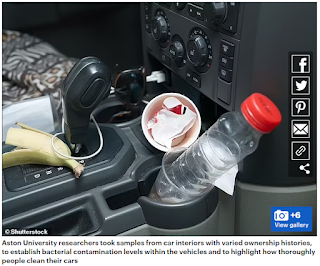 But scientists reveal today that the inside of your car is dirtier than the average toilet, and is home to a thriving community (cộng đồng) of harmful bacteria (vi khuẩn có hại).
Overall, the car boot had the most bacteria, followed by the driver's seat (ghế lái), the gearstick (côn xe) and the back seat.
...In particular, the study found that the car boot hosts to significantly high levels of bacteria, including E.coli – commonly known as faecal (phân) bacteria.
The findings 'pose a clear concern' for anyone that puts their fruit and veg in the boot after a trip to the shops or enjoys a drive-through meal in their car.
Bài trước: Meo! Meo!
Tags: science
Tags: video