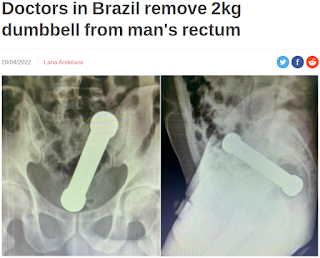 the 54-year-old patient (bệnh nhân) arrived at the emergency department (khoa cấp cứu) after suffering two days of abdominal pain (đau bụng), cramping (chứng chuột rút), nausea (buồn nôn, lộn mửa), vomiting (nôn mửa) and constipation (táo bón).
Following a physical examination and abdominal radiography (chụp X quang), the doctors discovered "evidence of the presence of a foreign body in the shape of an exercise dumbbell" lodged where the colon meets the rectum.
the man then admitted to an "accident" in which the dumbbell had become stuck inside him after insertion, and said he had already attempted to remove it himself to no avail (vô tác dụng). As the patient was in a stable condition with no signs of perforation (đục thủng, xuyên qua), he was taken to the operating room and an anaesthetic (thuốc mê) was administered.
A doctor then attempted to remove the dumbbell, but encountered difficulties due to its position, with the report noting that the weight was too far up to be extracted with tweezers or other grasping instruments.
As a result, the surgeon opted for "manual extraction" without tweezers. Yes, that means the doctor had to physically insert their forearm into the man's rectum - "with some difficulty" - to remove the weight.
Bài trước: Đéo mẹ, bọn tao biết từ lâu rồi
Tags: health