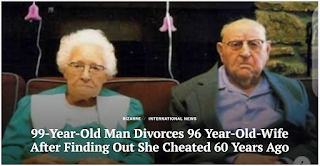 The damning discovery days before Christmas led the galled grandfather to confront his once two-timing wife immediately.
The 96-year-old woman, identified in court papers as Rosa C., reportedly confessed (thú nhận) to having an affair (ngoại tình) 60 years ago, and then tried desperately (liều lĩnh, liều mạng) to persuade (thuyết phục) her hubby to stay.
The scorned (khinh bỉ, khinh miệt) nonagenarian (thọ 90 tuổi), Antonio C., refused (từ chối) and filed for divorce (nộp đơn ly dị) despite a romance spanning nearly eight decades.
In that time, the couple amassed five children, a dozen grandchildren and one great-grandchild.
The uncovering of the letters inside an old chest of drawers was the final straw for a relationship that had already been rocky: 10 years ago, the husband moved out to live with one of the sons, but returned weeks later.
The Italian press attributed the bitter break-up to the couple’s southern roots – he is originally from Olbia in Sardinia, while his wife was born in Naples.
The former lovebirds met in the 1930s when Antontio was a military officer based in Naples.
Bài trước: Còn chối nữa?
Tags: marriage