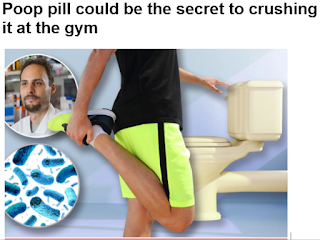 “When you have a disease like this, everyone says they have the cure — your mom clips something out of Reader’s Digest to send to you,” he said. Still, when his physician, Dr. Qingping Yao at Stony Brook University, asked if he wanted to join the beta trial of an intriguing (hấp dẫn, kích thích tò mò) new probiotic pill, he figured it couldn’t hurt. “‘Everything is worth a try,'” he added, of his thought process at the time.
Within weeks of starting it, he said he could increase the time he spent working out by 10%. Now, a year into his regimen, Gallagher’s workouts are 40% longer and significantly more intense. He is also down 7 pounds, even though his weight has rarely fluctuated in the past. “I’m a believer,” he said.
What he’s come to believe in, specifically, isn’t just any old gut health vitamin. Gallagher was part of a trial for a pill, which is being marketed under the name Nella, that contains bacteria (vi khuẩn) harvested from the poop (phân) of high-performing athletes (vận động viên thành tích cao).
Bài trước: Tai nạn hi hữu
Tags: health