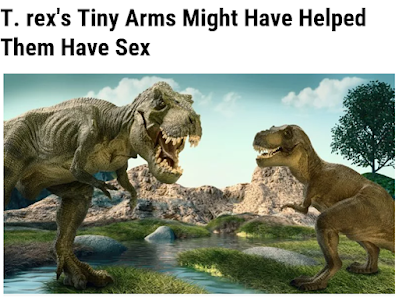 Scientists (nhà khoa học) in Argentina have discovered (phát hiện) a new species (loài) of dinosaur (khủng long) predator (dã thú, động vật ăn thịt) that has similar little arms to a T. rex, which they think it may have used to have sex, leading them to suggest that T. rex evolved them for the same reasons.
According to a study, published in the journal Current Biology, the fossils (hóa thạch) of the newly discovered dinosaur species Meraxes gigas is the most complete of its kind found so far in the Southern Hemisphere. The huge dinosaur is thought to have been around 36 feet long, with a 4-foot skull, and lived around 100 million years ago. The fossil includes a nearly complete forelimb that appears very similar to those seen in T. rex fossils, measuring in at only 2 feet long: half as big as its skull.
This led the scientists to believe that Meraxes used its skull and mouth as its main predatory weapons, and because its arms couldn't even reach its mouth, the little arms must have served some other purpose: such as sex.
"I'm convinced that those proportionally (có tỉ lệ đúng, cân xứng) tiny arms had some sort of function. The skeleton shows large muscle insertions and fully developed pectoral girdles, so the arm had strong muscles," Juan Canale, lead author of the study, told the BBC.
Bài trước: Thắc mắc kinh điển đêm khuya: Vì sao "cậu nhỏ" luôn... đen ...?
Tags: science
Tags: sex