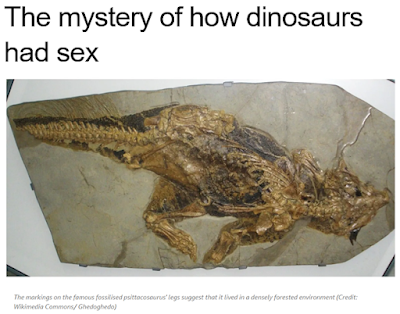 ..."So you can see, if you look underneath here [he gestures towards the psittacosaurus' cloaca, under its tail] – there's lots of pigment (sắc tố; chất màu, chất nhuộm)," says Vinther. He explains that this is melanin (hắc tố), and it might be partly responsible for the extraordinary level of preservation in this specimen.
Though we tend to think of melanin as the dark compound that gives our skin (da) its colour, it has a kaleidoscopic (kính vạn hoa, có nhiều màu sắc biến ảo) range of uses in the natural world, from its application as a pigment in squid ink to its function as a protective layer at the backs of our eyes. It's also a potent antimicrobial – in amphibians and reptiles, it's commonly found in high concentrations in the liver, where it prevents the growth of potentially harmful microbes. But crucially, it's also found in many other situations where this would be useful.
"For example, the insects… they use melanin as a sort of immune system to protect against infection. So if you poke a hole in a moth, for example, with a needle [this is not recommended], then the area around where you poke the hole will secrete melanin," says Vinther.
For this reason, many animals, including humans, have higher concentrations of melanin – and therefore, darker skin – around the genitals. And this is just as true for dinosaurs as it is for humans. Looking at the distant relative in front of me, who – as one of my colleagues pointed out – is frozen in a pose as though they're trying to tiptoe past me, it feels odd to recognise such an intimate similarity.
Bài trước: Top 9 sản phẩm thuốc diệt gián hiệu quả nhất hiện nay
Tags: science
Tags: sex