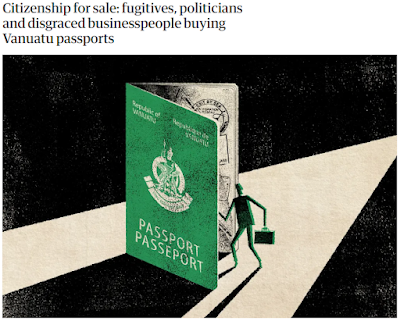 In June 2021, the government reported a budget surplus despite the Covid-19 pandemic (đại dịch), largely thanks to the continued demand for citizenship, and the government has used the profits to pay down debts.
And:
Vanuatu issued roughly 2,200 passports in 2020 through these programs – more than half (around 1,200) were to Chinese nationals. After Chinese, the most common nationality of recipients was Nigerian, Russian, Lebanese, Iranian, Libyan, Syrian and Afghan. Twenty people from the US, six Australians and a handful of people from Europe were also among those who applied.
Here is the full story,
Bài trước: Lời cảnh tỉnh
Tags: china