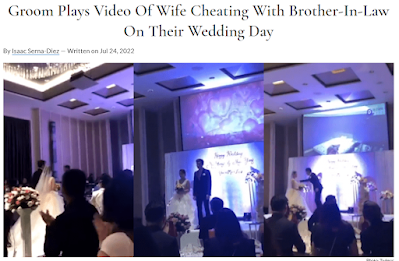 Where you would typically expect a compilation (biên soạn, sưu tập tài liệu) of photos or videos of the couple over the course of the relationship, the groom had a different idea instead.
The groom played a video of his wife cheating on him with her pregnant (mang thai) sister’s husband in front of everybody.
The unverified footage has been making its rounds across several prominent Chinese media outlets, which claim that the footage was shot by one of the guests.
As the emcee announced “now we are going to show you the videos of how the newlyweds grew up,” the groom had set up a different video to expose his wife.
The groom had the five-minute tape between the bride and her brother-in-law play out in front of family and friends at the ceremony in order to publicly humiliate (sỉ nhục) the woman who cheated on him.
The moment the video begins to play and guests register what exactly is going on, there is an audible gasp from everyone in the crowd, which leads to the groom shoving his bride, who retaliates by throwing her bouquet at him.
the groom shouted “You thought I didn’t know?”
Bài trước: Lại thua bọn Tàu rồi
Tags: china
Tags: marriage
Tags: sex