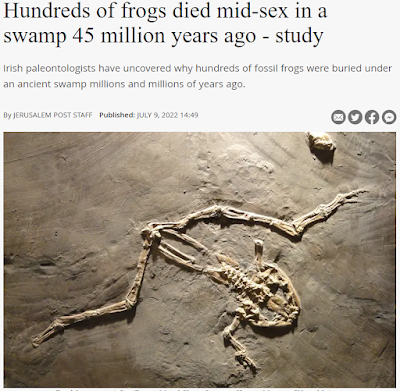 This is not surprising (không ngạc nhiên), as the phenomenon (hiện tượng) occurs quite often (xảy ra thường xuyên) in frogs today.
"Female frogs are at higher risk of drowning (chết đuối) as they are often submerged (bị nhấn chìm) by one or more males," according to senior author Prof. Maria McNamara.
How did the paleontologists narrow it down?
The fossil frogs, located in the Geiseltal valley region of what is now Germany, reveal patterns (khuôn mẫu) similar to those found in fossil frogs in the way they were preserved in lake settings of the Cenozoic, Earth's current geological era which includes the last 66 million years. This, according to the peer-reviewed study published in Papers in Palaeontology and conducted by researchers from the University College Cork.
Over 50,000 ancient animals - birds, horses, bats and frogs, too - had died in the area at the time, so the region is considered much of a paleontological treasure trove of sorts. This, during the Eocene Epoch: the geological epoch lasting from 56 million years ago up until 33.9 million years ago.
The swamp at the time was part of a subtropical forest. While previous studies believe that the frogs there died when the lakes emptied out or when the oxygen in the water was depleted, the paleontologists carrying out this study believed it, rather, to have been during or after mating.
Bài trước: Tin sốt dẻo đây
Tags: science
Tags: sex