Đăng bởi lovebird21c - 20 Jul, 2022
nam thanh niên thấy rối trí vì bạn gái vẫn bí mật... gặm tất :)
-----
A man claims to have recently learned of his girlfriend's childhood habit of chewing socks (gặm tất), but had no clue (manh mối) this was something she was still doing as an adult. 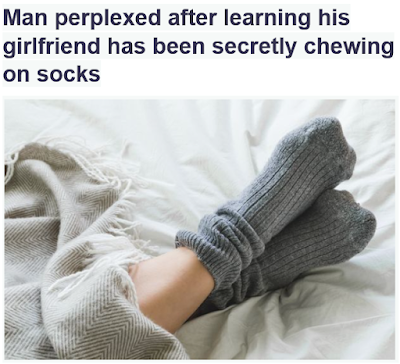 The sock chewing was brought up by her cousin during a family dinner, leaving her furious (giận dữ, điên tiết). However, the unnamed man simply saw it as "a silly, innocent (ngây thơ) childhood thing", and didn't see any issue at all.
However, he was surprised by how defensive she became after he asked her why exactly she used to do this, begging him to talk about something else.
He put the evening to the back of his mind until about one month later when he awoke early to find her with a sock stuffed in her mouth. It was the same sock she'd worn the previous day.
Bài trước: Em không như ngày xưa
Tags: marriage