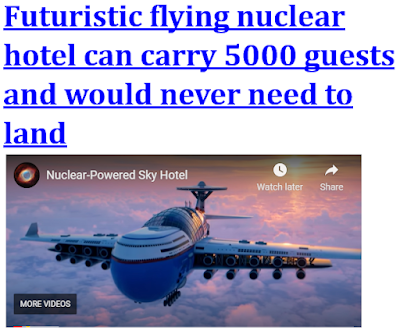 The Sky Cruise hotel would be piloted by AI would have 20 nuclear-fusion-powered engines and would never need to land back on Earth.
The concept (ý tưởng) was originally (ban đầu) designed by Tony Holmsten, but has been reimagined by Hashem Alghaili who animated the futuristic vision for Sky Crusie in incredible detail and said it “could be the future of transport”.
In a clip posted on YouTube, Alghaili explained that the flying hotel would be big enough to accommodate (chứa) over 5,000 guests and offer “the epitome (ví dụ hoàn hảo, mẫu mực) of luxury (sang trọng, hoành tráng)”.
The hall, a large circular room with glass on all sides, would offer a 360-degree view of the sky and other surroundings, linked by an elevator to the main decks.
Shopping malls, sports centres, swimming pools, restaurants, bars, theatres, children’s playgrounds, hospitals, as well as an area for conducting business.
The Sky Cruise would also feature wedding halls where people can get married.
Bài trước: Thật phấn khích
Tags: science