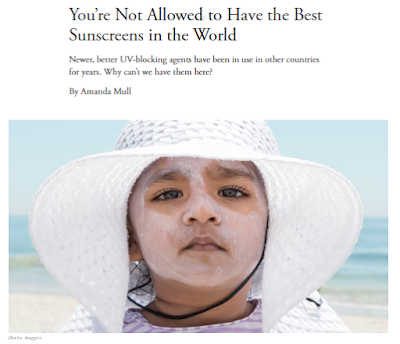 …In formal statements (tuyên bố chính thức) and position papers (báo cáo bày tỏ lập trường/quan điểm/thái độ), doctors and cancer-prevention (chống ung thư) advocates express considerable interest (quan tâm đáng kể) in bringing new sunscreen ingredients to the American market, but not a lot of optimism that any will be available soon.
…In 2014, Congress passed a law attempting to speed access to sunscreen (chống nắng) ingredients (thành phần) that have been in wide use in other countries for years, but it hasn’t really worked. “The FDA was supposed to be fast-tracking (đẩy nhanh) these ingredients for approval (phê duyệt), because we have the safety data and safe history of usage from the European Union,” Dobos said. “But it seems to continually be stalled (ngừng).” According to Courtney Rhodes, a spokesperson for the FDA, manufacturers have submitted eight new active ingredients for consideration (xem xét). The agency has asked them to provide additional data (cung cấp thêm dữ liệu) in support of those applications (hồ sơ đăng ký), but none of them has yet satisfied the agency’s requirements.
“In the medical community, there is a significant frustration (chán nản) about the lack of availability of some of the sunscreen active ingredients,” Henry Lim, a dermatologist (bác sĩ chuyên khoa da liễu) at Henry Ford Health, in Michigan, told me. The more filters are available to formulators (làm thành công thức), the more they can be mixed and matched in new ways, which stands to improve not just the efficacy of the final product, but how it feels and looks on your skin, and how easy it is to apply. On a very real level, making sunscreen less onerous to use can make it more effective. “The best sunscreen is going to be the one you’re going to use often and according to the directions,” Dobos said. Skin cancer is the most common type of cancer in the United States, and by one estimate, one in five Americans will develop it in their lifetime.
Bài trước: Suy từ tôi ra thì đúng thế đấy
Tags: health