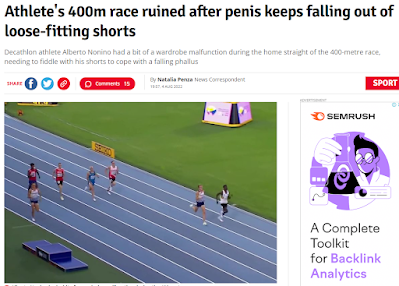 Decathlete Alberto Nonino started off promisingly (đầy hứa hẹn, đầy triển vọng) and went past two rivals in spectacular style on the last bend. But in the final straight he slowed down noticeably (dễ dàng nhận thấy) and was filmed grabbing (nắm) his crotch (háng) up to six times as his competitors (đối thủ) went past him and he finished at the back of the pack.
..."Last series of the 400 meters decathlon. The Italian Alberto Nonino in lane five begins very well but crosses the finishing line last. He had his p**** out, literally."
He added in a follow-up explanation (lời giải thích) to followers who didn’t immediately (ngay lập tức) grasp what he was getting at: "Perhaps I’ve explained myself poorly. His penis (dương vật) escaped out of the side of his shorts and he had to hold it because it wasn’t allowing him to run properly which is normal when your dongle is swinging from side to side."
Bài trước: Chắc ăn nhiều nên húng
Tags: sex