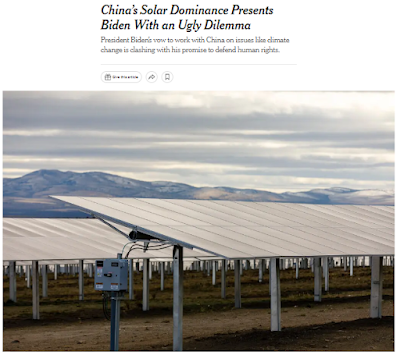 The administration is already eyeing a goal of generating 100 percent of the nation’s electricity from carbon-free sources such as solar, wind or nuclear power by 2035, up from only 40 percent last year. To meet that target, the United States may need to more than double its annual pace of solar installations (lắp đặt).
That is likely to be an economic boon (lợi ích kinh tế) to China, since the United States still relies almost entirely on Chinese manufacturers for low-cost solar modules, many of which are imported from Chinese-owned factories in Vietnam, Malaysia and Thailand.
China also supplies many of the key components in solar panels, including more than 80 percent of the world’s polysilicon, a raw material that most solar panels use to absorb energy from sunlight. Nearly half of the global supply comes from Xinjiang alone. In 2019, less than 5 percent of the world’s polysilicon came from U.S.-owned companies.
“It’s put the Democrats in a hard position,” said Francine Sullivan, the vice president for business development at REC Silicon, a polysilicon maker based in Norway with factories in the United States. “Do you want to stand up to human rights in China, or do you want cheap solar panels?”
Bài trước: Con ngựa thành Delaware
Tags: china