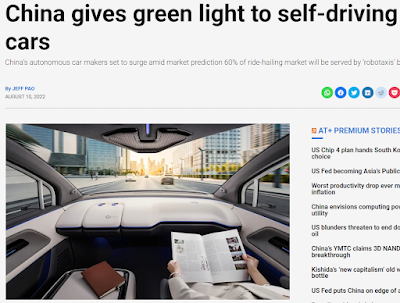 The Ministry of Transport on Monday (August 8) released a set of guidelines (nguyên tắc chỉ đạo, đường lối chỉ đạo) that encourages (khuyến khích) the use of self-driving cars for taxi services under certain conditions. The public consultation on the guidelines will end on September 7.
...However, some analysts (nhà phân tích) pointed out that many automakers were suffering from chip shortages as an e-vehicle can use up to 300 micro-controllers (MCU), most of which are produced in Taiwan.
They said such a situation could worsen if the net effect of the Chips and Science Act, signed by US President Joe Biden on Tuesday, is to discourage chip makers from building new fabs in mainland China.
Self-driving vehicle makers worldwide have actively promoted their products while struggling to meet safety requirements. In the US, major players include Ford, General Motors and Tesla – with some of them using Google Maps and others developing their own navigation systems.
In China, key related brands include Baidu’s Apollo, Pony.ai, Xpeng, Alibaba’s AutoX, Nio and BYD.
According to the US National Highway Traffic Safety Administration, about 400 crashes involving fully or partially self-driving cars were recorded in the US between July 2021 and May 2022.
Bài trước: Lợn vào khách sạn
Tags: china