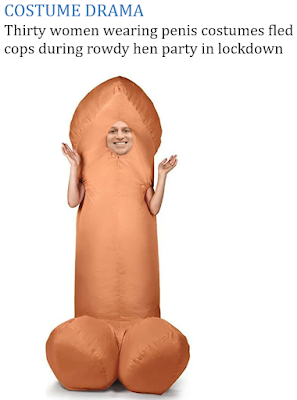 The willy-wearing group were reported to police after turning up at a car park in 12 vehicles.
The noisy revellers got together in party town Blackpool despite pubs being closed and a ban  (lệnh cấm) on such gatherings (tụ tập) under Covid laws.
A police handler who took the call in noted: “About 30 people having a hen party all dressed up as a penis (dương vật).”
The todger girls fled before police arrived to escape Covid fines last year.
Details about the party, held during the second lockdown in March 2021, were discovered through an FOI request of UK police forces by party organiser Last Night of Freedom.
The Gateshead-based firm was trying to discover just how much trouble hen and stag parties cause police.
And company boss Matt Mavir reckons the results – which showed many forces had barely any pre-wedding issues to deal with - shatter traditional stereotypes.
Bài trước: Vẫn còn đi tất mà
Tags: sex