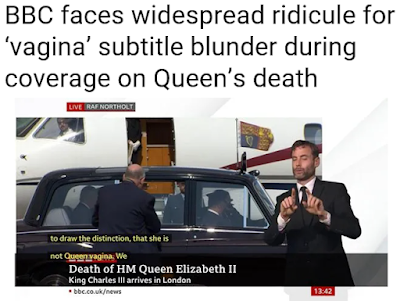 The public broadcaster was covering the tragic (bi kịch) death of the monarch (quốc vương) as it shifted its discussion to the transition of the monarchy to King Charles III. Charles, who had travelled to Balmoral Castle in Scotland after hearing the news of his mother’s health, had returned to London on Friday. He was accompanied by his wife Camilla, who will now be called as the Queen Consort (vương hậu).
BBC newsreaders explained how Camilla was a Queen Consort and the Queen Regina. However, the TV channel’s subtitles mistook Regina for a vagina. Eagle-eyed Twitter users were quick to highlight the embarrassing gaffe (sai lầm, nói hớ) by the BBC on the social media platform.
One wrote, “Dear BBC News, kindly tweet a footage that shows “the Queen of Vagina” subtitle appeared on the screen during news reporting, please.”
Another commented, “The BBC called her the vagina instead of Regina today in their subtitles! Maybe it wasn’t a mistake. A fitting place for the royal tampax!”
Bài trước: Sao chưa khai báo?
Tags: sex