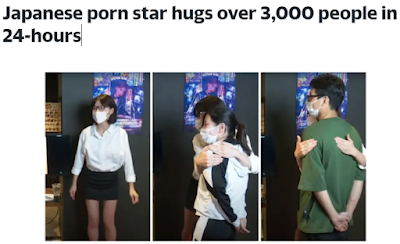 Fukada Eimi, 24, held the event in Shibuya, Tokyo, at 6 p.m. on Saturday. She allegedly took one three-hour break and a few 10-minute breaks. By the end of the event, she stated that she was “completely exhausted (mệt rã rời).”
The event ended at 6 p.m. on Sunday after Fukada had hugged a total of 3,163 fans.
“This time, with 3,163 people, I was able to do my best for 24 hours with everyone’s help. Thank you very much,” Fukada said at the venue (nơi diễn ra sự kiện) following the event.
Fukada wore various costumes (trang phục, y phục) throughout the event, including a traditional yukata, a bunny outfit and an office worker outfit.
Fans were not required to pay for the hug; however, smartphone photos cost 1,000 yen (approximately $7.13). During the event, fans were required to keep both of their arms at their sides or back and were not allowed to return Fukada’s hugs.
The event was extremely popular, and on Sunday morning, event organizers were forced to stop people from lining up as it became too overwhelming. The queue resumed at around 10 a.m.
Bài trước: Không thể 'bình dân hóa' luận án tiến sĩ
Tags: japan
Tags: sex