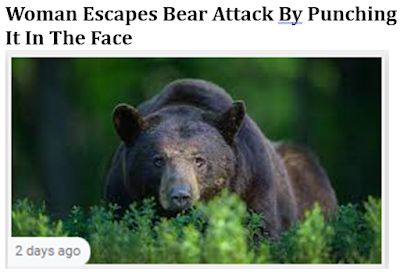 The unnamed woman in Leavenworth was charged by an adult female black bear as she was letting her dog out.
She sustained non-life-threatening injuries and was taken to an area hospital (bệnh viện). The bear was killed later than morning by wildlife officers, and two cubs (gấu con) were captured and taken to a wildlife rehabilitation facility.
State wildlife biologist Rich Beausoleil told Seattle’s KING-TV that the woman made the right call by attacking the bear after she was knocked to the ground.
“She didn’t see it coming, so she could not make herself big, clap her hands, you know, yell at the bear, wave her arms,” Beausoleil told the station. “Those are the things we usually tell people to do.”
“If the bear knocks you down, then yes, your solution is to fight.”
Bài trước: Quy trình nó thế
Tags: funny