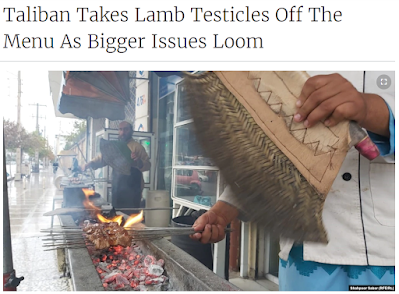 The recently announced ban on the sale of testicles of sheep and other animals has infuriated local business owners and customers, who say the Taliban is focusing on trivial issues while avoiding more pressing problems.
"I’m surprised that the Taliban are focusing on small issues such as banning the sale of sheep testicles. It is a really small issue," a Herat resident told RFE/RL's Radio Azadi on condition of anonymity on November 6. "We have many bigger problems in Afghanistan, such as poverty and the closure of girls' schools."
The country is suffering from a major humanitarian crisis brought on by severe drought and the spread of disease, and has been identified as a "hunger hotspot" by the United Nations.
Since the Taliban seized power in August 2021, nearly 700,000 people have lost their jobs in Afghanistan and nearly 90 percent of those employed earn less than $1.90 a day, the International Red Cross reported earlier this month.
Bài trước: Xứng đáng 1/2 giải Nô bẹn
Tags: sex