Đăng bởi lovebird21c - 14 Nov, 2022
hãng ô tô hàn quốc hyundai phát minh ra túi khí bung ở... háng để bảo vệ "tài sản" của bạn... :D
-----
Airbags are a critical aspect of car safety. With the cushioning that airbags provide during a crash, injuries and fatalities are significantly reduced. Until now, the primary focus of airbags has been to mitigate the impact to one’s head. Front airbags have been mandatory since the 1999 model year. Most vehicles also have side airbags. However, now, Hyundai is taking airbag design to the “nether regions” of protection. The South Korean automaker invented an unusual crotch airbag. 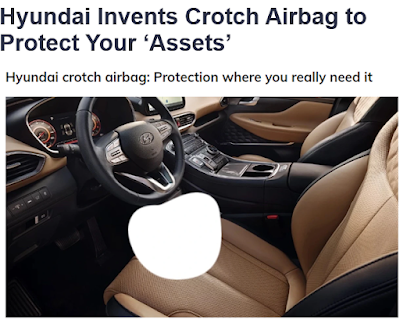 ...In addition to protecting your “assets,” the crotch airbag helps make a seatbelt properly function, as detailed by CarBuzz. A problem with seatbelts is vehicle occupants rarely have them in the correct position — like how they are when tested by crash authorities.
Frequently, the lap belt rides up over the pelvis of the driver and passengers. This is due to a number of factors, including poor posture, gravity, and the vibration of a car. This improper lap belt positioning can be a problem during a crash, especially for smaller occupants. They can “submarine” — or slip underneath the lap belt. When one slips underneath the lap belt, it can cause organ damage as it tightens over the soft stomach.
Bài trước: Nhà ma ở Texas và sự thật kinh hồn không ai biết
Tags: sex