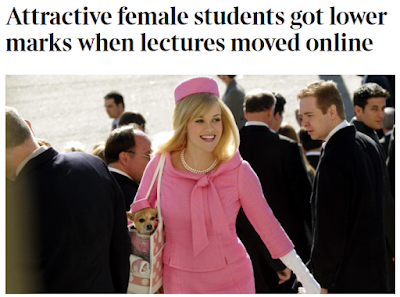 The results may help to settle a long-standing debate (tranh luận từ lâu) over why good-looking people often appear to have an advantage in life.
Researchers have known for several decades that attractive individuals tend to receive higher wages than their less attractive peers. They are more likely to be promoted and less likely to go to prison (nhà tù).
They also often tend to get better grades (điểm cao) in university (đại học). But the reason for this “beauty premium” has been disputed. Some experts believe that it’s simply a case of professors (giáo sư) discriminating (phân biệt đối xử) in favour of more attractive students.
...When the Covid pandemic struck Sweden, and much of the world, in early 2020, schools were forced to use video apps like Zoom for instruction.
In many cases, professors would not even know how many of their students looked and face-to-face interactions were near extinct (tuyệt chủng).
During this period, the benefits that attractive female students had in qualitative courses disappeared.
Interestingly, the same phenomenon was not viewed in men. Attractive male students maintained their small boost in grades compared to their less-attractive peers.
Mr Mehric believes that this is because attractive males generally have other traits valuable in qualitative courses, like more self-confidence, which can be valuable during a graded class presentation.
He also said that a majority of professors in the study were male, so female attractiveness could have been a stronger factor than that of males.
Bài trước: Cần hoang dại hơn
Tags: funny