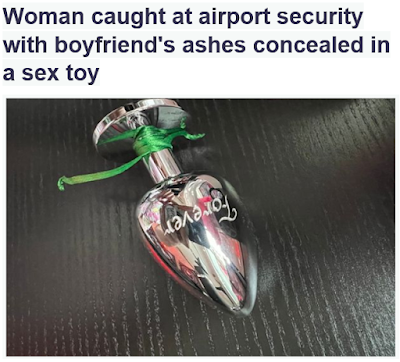 Sarah Button told of her unusual (không thông thường, lạ, khác thường) experience (trải nghiệm) on TikTok, where the video has racked up over 4.9 million views, leaving users stunned (ngạc nhiên, choáng váng).
The sex toy was a butt plug from the 23-year-old's late boyfriend, which the law student claims to have worn while going through security in the United Arab Emirates, allegedly causing issues with staff.
Sarah from Australia said: "I explained what it was but there was a lady worker in earshot of that conversation (trò chuyện, hội thoại) which led to some back and forth between us and the male officials did not like the vulgarity (hành động thô bỉ, lời nói thô tục) I was using to explain.
"They took me and my friend aside without much explanation."
She claimed airport security then took the group's passports and phones and she was forced to call her dad to ring the Australian embassy (đại sứ quán) for help.
...Her boyfriend had bought her the item as a joke gift before he died.
She said: "We lost touch for a little while and during that time he passed and unbeknownst to me he knew he was passing and had it in a box and I received it at his funeral.
Bài trước: Anh đã có rồi còn giành của em
Tags: marriage
Tags: sex